Vietri sul Mare (“on the Sea”) 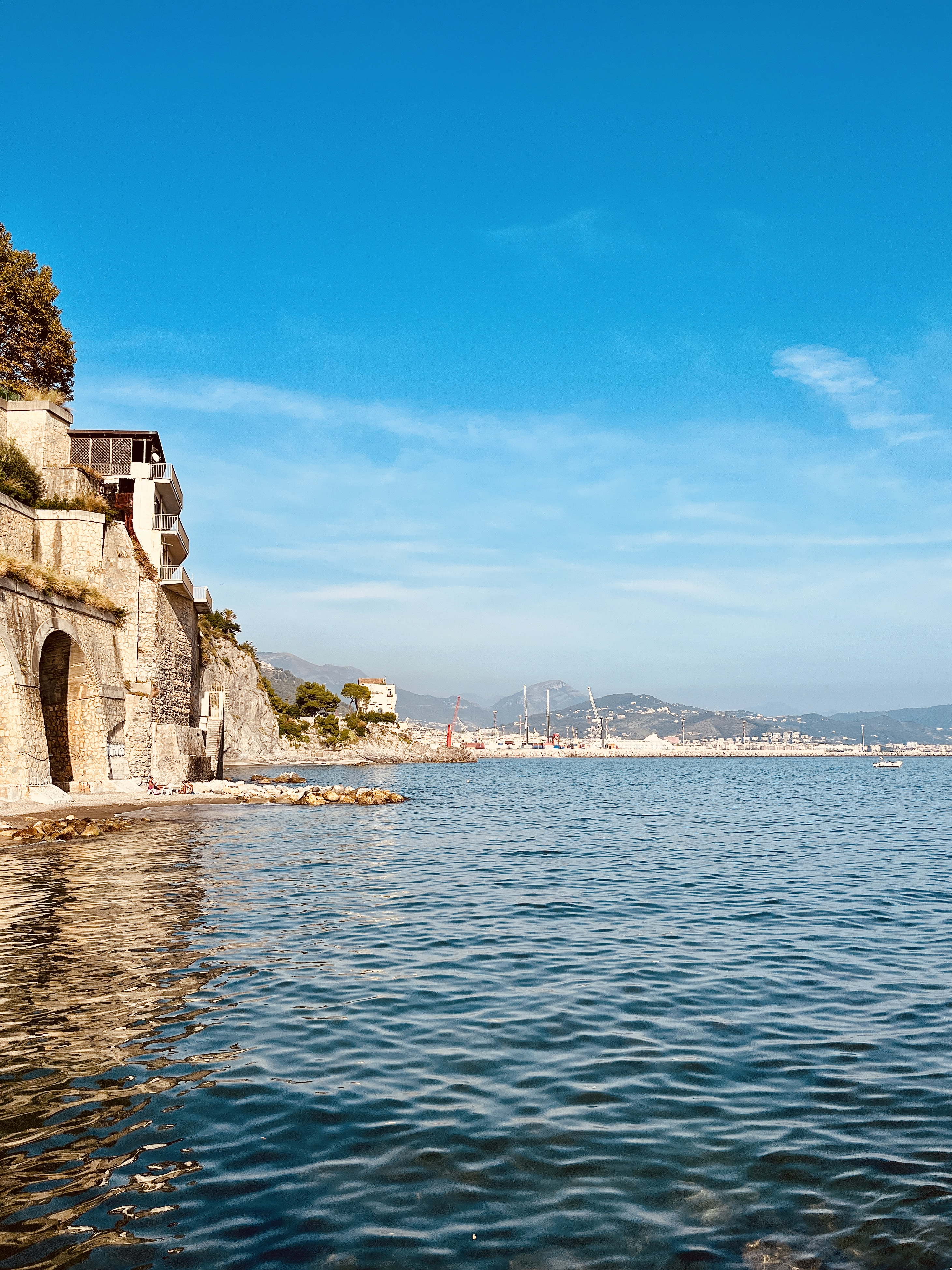 Vietri is a village near Salerno. It is a popular tourist destination and it is a convenient place to visit the Amalfi Coast. The inhabitants call it “The First Pearl of the Coast,” claiming that the Amalfi coast begins there. Vietri is popular also for the production of ceramics (dishes, flowerpots, vases and tiles) that can be found in restaurants, hotels and homes throughout the Amalfi area.

Places of interest in Vietri

Placed in the heart of the homonymous gulf, Salerno represents the combination between a fascinating history and a huge sphere of artistic, urbanistic and architectural beauties. 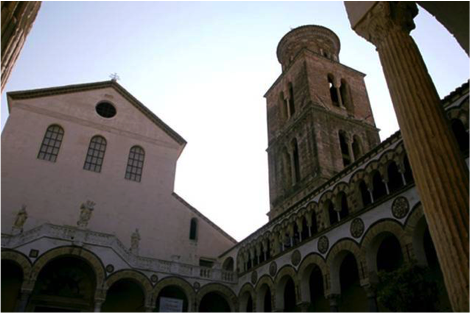 The area of Salerno hosted a small Pre-Roman settlement, as witnessed by the Etruscan necropolis in the quarter of Fratte. The Roman castrum Salerni was then founded in 197 BC. In the middle ages Salerno became the main Longobard principality in the south of Italy. In this period the Schola Medica Salernitana, the oldest university in Europe, became the center of the whole European medical knowledge in the middle ages. With the arrival of the Normans lead by Robert Guiscard, Salerno was still the major center of the southern Italy, even offering protection to the Pope for a few years. However, the capital of the Norman reign uniting the whole southern Italy was later moved to Palermo, and with the emperor Frederick II, Salerno definitely lost its capital role in favour of Naples.

In September 1943, during the World War II, Salerno was the scene of the Operation Avalanche and suffered a great deal of damage. From February 12 to July 17, 1944, it hosted the Government of Marshal Pietro Badoglio. In those months Salerno was the temporary "Capital of the Kingdom of Italy", and the King Victor Emmanuel III lived in a mansion in its outskirts. 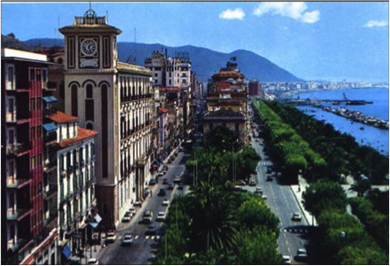 Salerno is a very lively town that has been rapidly renewing its look in the last few years. From west to east, we find the commercial port, the old town, and the modern center ending at the train station. Beyond the station, the town has considerably grown in size in the last fifty years, reaching 140,000 inhabitants. You will certainly appreciate the shops of Via dei Mercanti in the old town and Corso Vittorio Emanuele in the modern center, stretching eastward to the train station. With fine weather, have a stroll on the beautiful Lungomare (seafront). You will find a lot of restaurants and pubs both in the old town and in the modern center. In particular, people use to cluster in Via Roma in front of the town hall.

Places of interest in Salerno

Salerno lies at the beginning of the world famous Amalfi Coast with its rocky cliffs rising from the sea and the small villages populating the narrow fjords. 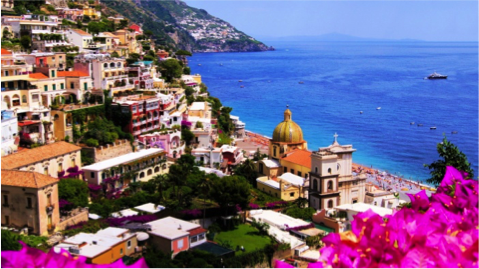 The Amalfi Coast is a popular tourist destination for the region and Italy as a whole, attracting thousands of tourists annually. During the 10th–11th centuries, the Duchy of Amalfi existed on the territory of the Amalfi Coast, centered in the town of Amalfi. After the sack of Amalfi by the Republic of Pisa in 1137, the Amalfi coast has experienced a crisis. In 1997, the Amalfi Coast was listed as a UNESCO World Heritage Site as a cultural landscape.


Amalfi is a town in the province of Salerno that lies at the mouth of a deep ravine, at the foot of Monte Cerreto, surrounded by dramatic cliffs and coastal scenery. The town of Amalfi was the capital of the maritime republic known as the Duchy of Amalfi, an important trading power in the Mediterranean between 839 and around 1200. It occupied a high position in medieval architecture; its cathedral of Sant'Andrea (Saint Andrew, 11th century), the campanile, the convent of Cappuccini, founded by the Amalfitan Cardinal Pietro Capuano, richly represent the artistic movement prevailing in Southern Italy at the time of the Normans, with its tendency to blend the Byzantine style with the forms and sharp lines of the northern architecture.

One of the gems of the Amalfi coast is Ravello, 350 meters above sea level, where the light effects and magical architecture create a vision of rare intensity. Its name is immortalized in Boccaccio’s Decameron. Famous for its tranquil and serene atmosphere, Ravello offers architectural gems of rare elegance. The 11th century Duomo, dedicated to San Pantaleone, is rich with artistic treasures like the grand bronze central door adorned with 54 panels. To the right of the Cathedral a square tower marks the entrance to Villa Rufolo. Immersed in a verdant park of exotic and mediterranean flora, the original structure dates back to the 13th century and even today some of its arab-siculian architecture is evident.
Villa Cimbrone was, originally, a simple hut. It was bought in 1904 by Ernest William Beckett, who transformed into an exceptionally fascinating Villa. It has hosted many celebrated personalities, from Winston Churchill to Greta Garbo. The belvedere is a terrace that gives on to infinity, and has no equal in the world.

Positano was a port of the Amalfi Republic in medieval times, and prospered during the sixteenth and seventeenth centuries. By the mid-nineteenth century, however, the town had fallen on hard times. More than half the population emigrated, mostly to America. It was a relatively poor fishing village during the first half of the twentieth century. It began to attract large numbers of tourists in the 1950s, especially after John Steinbeck published his essay about Positano in Harper's Bazaar in May, 1953. The church of Santa Maria Assunta features a dome made of majolica tiles as well as a thirteenth-century Byzantine icon of a black Madonna. 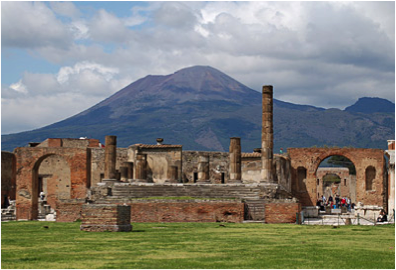 The city of Pompeii was an ancient Roman town-city. Pompeii, along with Herculaneum, was mostly destroyed and buried under 4 to 6 m (13 to 20 ft) of ash and pumice in the eruption of Mount Vesuvius in 79 AD.

The eruption destroyed the city, killing its inhabitants and burying it under tons of ash. Evidence for the destruction originally came from a surviving letter by Pliny the Younger, who saw the eruption from a distance and described the death of his uncle Pliny the Elder, an admiral of the Roman fleet, who tried to rescue citizens. The site was lost for about 1,500 years until its initial rediscovery in 1599 and broader rediscovery almost 150 years later by Spanish engineer Rocque Joaquin de Alcubierre in 1748. The objects that lay beneath the city have been well-preserved for centuries because of the lack of air and moisture. These artefacts provide an extraordinarily detailed insight into the life of a city during the Pax Romana. During the excavation, plaster was used to fill in the voids in the ash layers that once held human bodies. This allowed one to see the exact position the person was in when he or she died.

Herculaneum was an ancient Roman town destroyed by volcanic pyroclastic flows in 79 AD. It is also famous as one of the few ancient cities that can now be seen in almost its original splendor; unlike Pompeii, it was mainly affected by pyroclastic flows, thus preserving the wooden objects such as roof tops, building beams, beds, doors, and even food. Moreover, Herculaneum was a wealthier town than Pompeii, possessing an extraordinary density of fine houses, and far more lavish use of colored marble cladding. The discovery in recent years of about 300 skeletons along the seashore came as a surprise, as it had been assumed that the town had been evacuated. 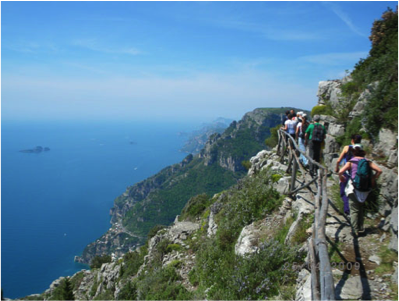 Salerno is surrounded by two national parks: Vesuvio and Cilento; and two regional parks: Monti Lattari, Monti Picentini. The highest mountains, touching 1800 m, are covered by a dense forest very rich in waters. They offer beautiful views on Salerno gulf and the whole Campania region. Among the hundreds of trails in the region, the most famous is Sentiero degli Dei ("Path of the Gods"), on the top of Amalfi coast. The dominant rock is limestone, which is ideal for climbing, especially in the Amalfi coast, where many climbing sites are equipped.